The easy way to automatically scale your charts and tables.

The need to scale charts properly is ubiquitous in the world of BI; if you are dealing with the finances of a large international company, for example, it's both inelegant and wasteful of real estate to show a scale that looks as follows:

Instead, what I almost always do is find the smallest dimension value for a particular chart, and scale the entire chart to that value. Here's what the above chart looks like if we apply that technique, which results in a scale of millions:

Technically I could have scaled this to the hundreds of millions, but my personal preference is to always scale to orders of magnitude that are multiples of 3: ones (10⁰), thousands (10³), millions (10⁶), billions (10⁹), etc.
Rather than recreate the code to scale your charts in every object of every application, here's a quick way you can get perfect scaling every time, without messing around with performance-heavy nested IF statements that repeatedly check whether a number if >=blah and <=blah. The following code is for Qlik applications, but is super simple to adapt to virtually any BI platform (even Excel!). Simply divide your chart values by the following denominator function:
Let's unpack what this does, starting with the inside and working our way to the outside:
Success! We now know that the number 14,125,985 should be scaled to the millions. In real-life situations, of course, you would not know in advance what number to pass in as the first parameter, you would want to make that dynamic. In Qlik, you can simply turn the above into a custom function using the power of variable parameterization (discussed at length here). Let's create a new variable, name it vDivideBy, and give is the following value:
I can call this function with the following syntax, where the middle part becomes the parameter:
As mentioned briefly above, a good rule of thumb is to scale to the smallest dimension value you have in a given chart. In Qlik syntax, that can be achieved with an aggr() function wrapped in a min(). For example, if I have a chart of sales by product, I could write:
And if I want to display some helper text in my chart to let users know the scale that I'm using, I can just wrap all of the above in a couple additional functions: 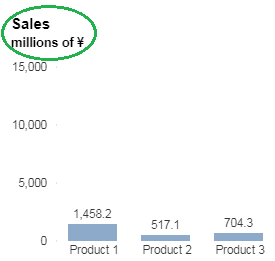 This technique has one important limitation, however: it will scale your entire chart to the same value. When you are dealing with graphical charts, that's absolutely a good thing—you would never want to divide one bar by a billion and another by a million, because the heights of the bars matter and you don't want to create a false comparison. But when you are displaying values in a text table, it can be very elegant to scale each row independently. 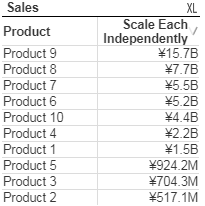 To do that, we can use the same basic concepts as above, but we cannot leverage the variable parameterization technique. Instead, the actual component functions themselves would be called directly in the table's expression:
Bonus tip: Don't forget to wrap the entire expression in a dual() function as shown here, so that Qlik understands the values are numbers and not text!
As always, all are welcome to download the full code behind the examples shown here and experiment for themselves. Enjoy, and if the tips in this article helped you, I would love to hear all about it in the comments below!
OrderOfMagnitude.qvw
This entry was posted in Development, Tips & Tricks and tagged Logarithms, Order of Magnitude. Bookmark the permalink.