Red and Green: When Should Callout Colors Actually Be Used?

Take a look at any dashboard, or at any other part of most BI applications, and you will, almost universally, see a predominance of red, green, or other "callout" colors that are used to draw a user's attention. We have all been preconditioned since our school years that Green=Good and Red=Bad. So there is no problem using these colors to indicate good/bad in dashboards, right? Right. And wrong.

We should begin our discussion with the purpose of using bright colors in dashboards in the first place. As many data visualization gurus have noted, people are perfectly capable of analyzing trends in charts that use only softer earth tones or even monochrome. For instance, take a look at the below chart:

This chart uses bright colors for no reason. Now look at the same chart in monochrome: 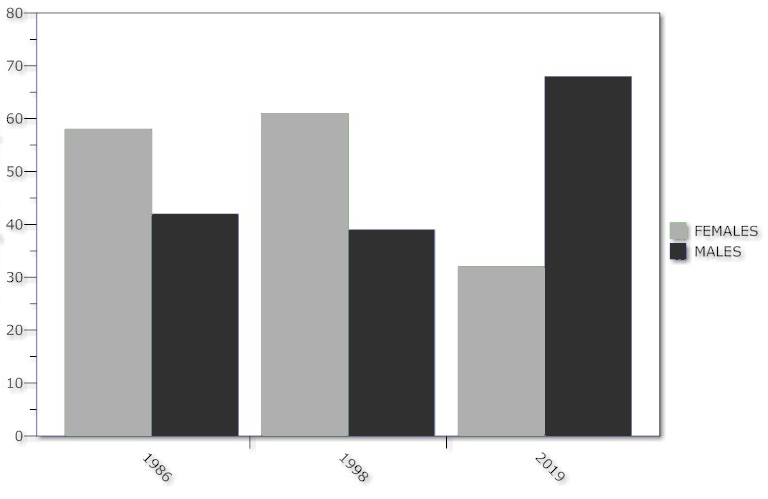 As you can see, there is no visible difference in the data clarity‒it is just as easy to understand the trend in this chart as in the bright version. The monochrome version is much easier on the eyes, however. And, even more importantly, the subconscious color message is neutral. As mentioned above, we have been conditioned to intuitively understand that red and green have meanings. On top of which, red and green are just the two most prominent examples; any bright color draws the eye. The result is that users often pay far more attention to the colors in charts than is appropriate for the data that the charts represent. In the above example, that could mean incorrectly inferring that just because the green bar is higher in 1998 that it is necessarily better. Suppose we add some context by now including a caption in the chart: 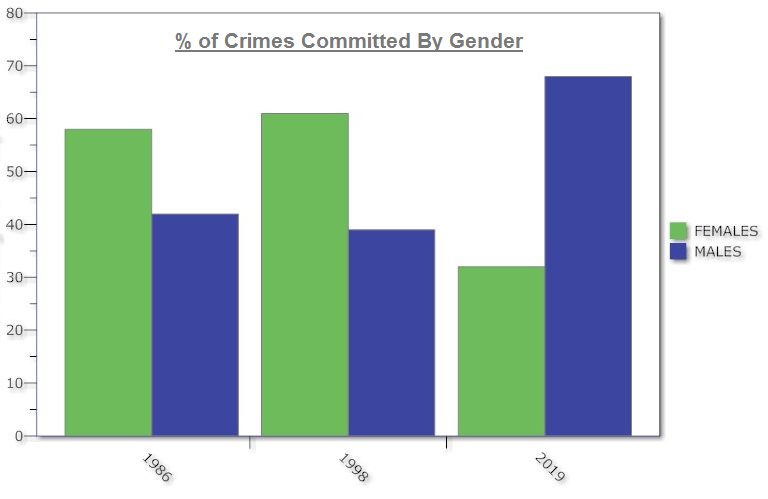 We can clearly see that, in this case, the fact that the green bar is higher in 1998 is actually bad news (certainly bad news for females, although crime is never good news, of course). Unfortunately, our brains do not work this way. We internalize the emotional message conveyed by colors on a much deeper level than the purely intellectual message conveyed by a legend/caption. We may think that we understand what this chart is conveying, but each time we catch a glimpse of it in the corner of our eye, the Green=Good message comes back.
The general importance of proper color use is excellently made by data visualization guru Stephen Few, and is beyond the scope of this article. I hope we have established, though, that bright colors are not a prerequisite in and of themselves for a dashboard to be visually compelling. Please note that I am certainly not advocating the universal use of monochrome charts; colors are perfectly fine, as long as they remain subtle when a callout is not intended or needed. Which brings us to our next point: when are callouts needed?
Why We Use Dashboards
Think about the dashboard in your car. Or, rather, think about your car without a dashboard‒the car would continue to function normally, but you would just not have any feedback about certain things. Would you feel safe driving that car? I hope not! You would not know when the car was almost out of gas, would need to guess at your speed, and would have no indication if something had gone wrong with the engine of the vehicle. A dashboard in a business intelligence application should be designed with the same purpose as a car's dashboard: to allow the "driver" (application user) to garner meaningful information quickly in order for that driver to then be able to quickly take informed action.
The first principle of dashboarding, therefore, must be to only include charts and objects that provide meaningful information. In this context, meaningful information is limited to only that information that actually enables action by the user. Imagine if your car's dashboard displayed information about the current weather in Okayama, Japan, where the car was manufactured. Or displayed the total number of cars that you had passed since leaving the house that morning. Neither of these pieces of information is at all meaningful to your current drive. Now imagine that they are not only displayed, but displayed in bright red, while the gas gauge is displayed in black. Your eyes would constantly be drawn to irrelevant information when you first glance at the dashboard, and you would waste a frustrating amount of time and energy forcing them to instead focus on the relevant information. Eventually you would sell the car and would make sure that the next car you bought had a better dashboard. Translating this to business terms, that means that user adoption of BI apps drops when dashboards display data that users simply do not care about‒data that is not readily actionable. This is exponentially truer when that data is displayed in a distracting way, such as with bright colors, because then it is not only irrelevant, but actually distracts from information that is relevant. And one thing you can count on is that, just as drivers with bad dashboards will not give up driving, users with bad dashboards will not give up analyzing their data‒they will simply find a BI solution that better meets their needs.
To encourage users to use the applications that you create, let us now see how some critical "callout" design principles apply to real-world dashboards. The following dashboard was designed for use by senior management at banks: 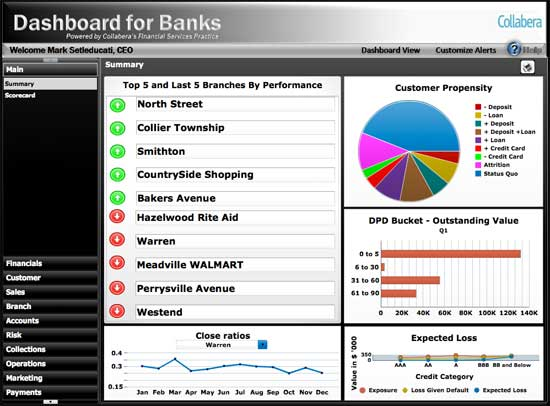 Unless this organization's strategy is to encourage their competitor's success, the chart uses red and green coloring incorrectly. In certain situations, such as a competitor's growth, a negative number is actually a positive for your business. Make sure that your good/bad color usage aligns accordingly. Along the same lines, consider using some sort of thresholds when creating green/red indicators. For instance, perhaps a decrease in sales of only 0.05% is not a cause for worry. According to Principle 1, therefore, a red callout should not be used in that case (since no course correction is needed).
This is by no means an exhaustive list of color-related best practices in BI and only briefly touches on the proper use of non-callout colors and objects. However, the 6 principles that are laid out in this article are universally applicable. If you apply them consistently, it will almost always result in better visualizations, and in dashboards that enable your users to gain insight from your applications like never before!
This entry was posted in Visualization and tagged call out, callout, colors, dashboard, data visualization, design, green, QlikView, red. Bookmark the permalink.

One Response to Red and Green: When Should Callout Colors Actually Be Used?